So yeah, those are 7 things I found amusing from my 7 weeks being here in Zimbabwe so far.

I landed safely in the country last month on the 23rd, and have been living with my host family right after we came from the airport. I am living at the eastern part of the city with them, 8 kilometers away from the city center. The family I am living with is consisted of the parents and 2 small kids, 9 years old and 5 years old.

There are 4 exchange program participants in Bulawayo, Zimbabwe. 2 SALTers from Canada, Micaylee and Alison, another YAMENer from Cambodia, Vichhay, and me. We all work in different places and stay with different host families.

We started 1 week orientation at August 26th, where the MCC Reps and staffs explained about the works of MCC here in Zimbabwe, and what cultural things to expect here. We also went to Hwange National Park to have a team retreat with the MCC staffs and their families.

Currently we are in the language class week, and we are going to visit our workplaces tomorrow, which I feel very excited about. Next week we probably would still have some language class, and probably more about the working place.

I am attending the Bulawayo Baptist Church right now with my host family. And beside attending the Sunday services, me and Micaylee also attend the bible study group on Wednesdays. It actually helps a lot to interact and make friends of our peers outside the MCC circle.

Last two weekends ago, I went with my family to watch cricket matches (first time for me!), and it was pretty cool. It’s not that kind of sports with a lot of cool movements and acts, but at the end of the match I actually went on to support one of the team in the competition.

Right now it’s at the end of winter, and spring/summer is supposedly coming soon. The weather is a bit weird here, and they told me it’s mainly just winter and summer all year round.

Some flowers have started to bloom around! Next month they said it should be all green and purple all around the city, I can’t wait to see that!

We have light the fireplace in our house twice already because it was very cold last weekend, we had some smores and just chilled out around the fire. We never need fireplace in Indonesia, so it’s pretty exciting for me to do that.

I guess that’s it for now. Until next time! 🙂

As I’ve mentioned before, I will be going to Zimbabwe next week to volunteer with MCC for 11 months. The program I am in is called YAMEN, shortened from Young Anabaptist Mennonite Exchange Network. Read more about YAMEN (and MCC) HERE!

Sadly, unlike what I’ve said previously, after deep considerations, I’ve ultimately decided not to bring my film camera with me to the continent.

Last Tuesday as we gathered at Salatiga for a short orientation, I tried to filmed some sort of a vlog, to share with my friends and family how it was, how I was and just to share some fun.

I cannot promise for more vlogs (or filming more often) in the future since it’d also depend on my future schedule, but I am taking lots of pictures that’s for sure 🙂

As for now, please enjoy.

So after last trial with film photography, I bought another roll of film to try on my old Fuji DL-10. This time I was using Fujicolor C200 to work with.

Beware, I made no edit to these photos, they are out straight from the roll. 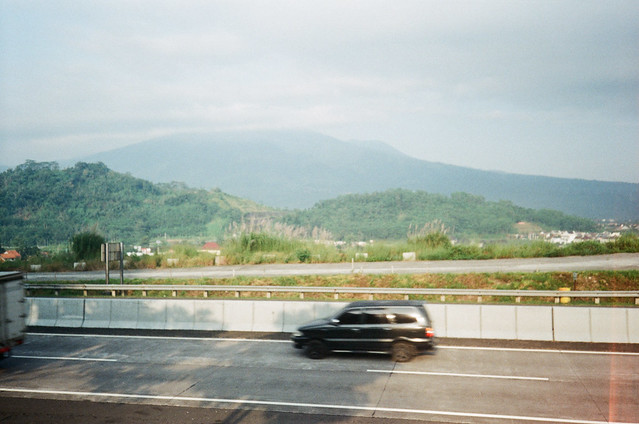 We were on the rest area at the highway when I shoot this. I waited until some car would pass by, so that I would get that nice movement inside the frame. Not disappointed, this is one of my most favourite. 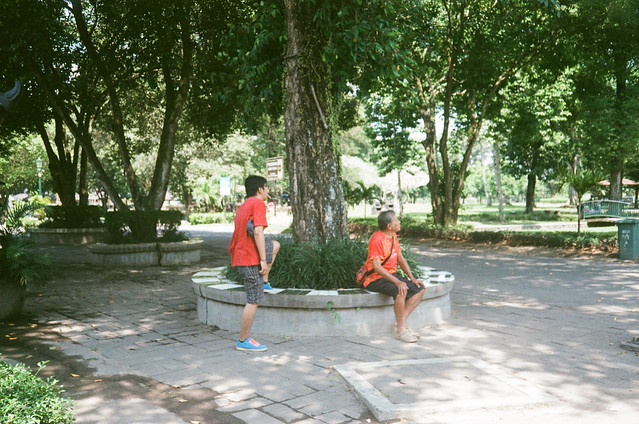 We were on our way to the Prambanan Archaeological Park. We stopped for a short toilet break as well as to stretch out our legs before we continued the walk to the temples site. 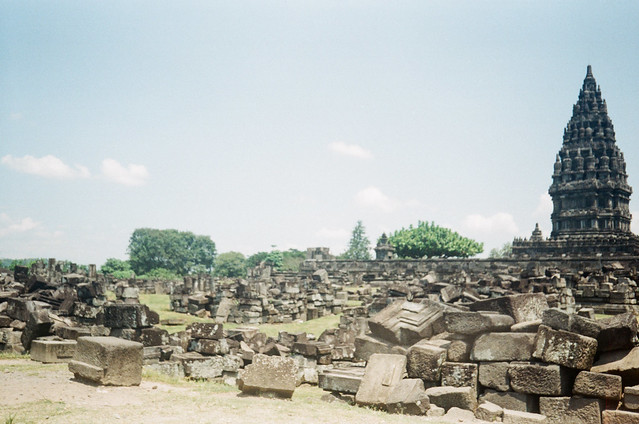 Due to the 2006 earthquake that hit Yogyakarta, a lot of the temples collapsed. Here is believed that according to the legend there should have been 999 temples made in one night around this site. Historically, it was the kings of Mataram Kingdom who built the temples. 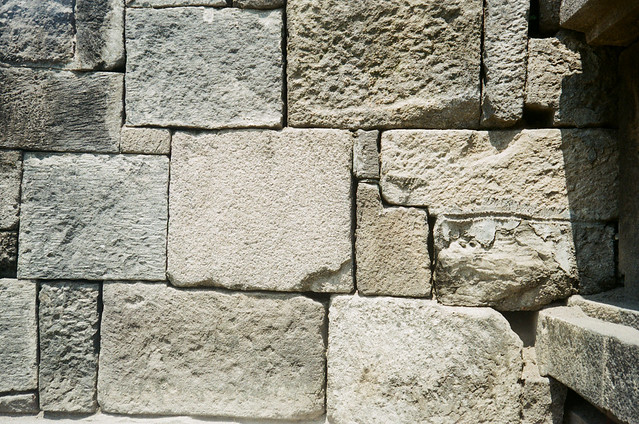 How exactly people of their era built all those magnificent temples still amazed me every time. They made all of them by stacking these blocks of stone and glued them only with white eggs, and they stood proudly for thousands years. 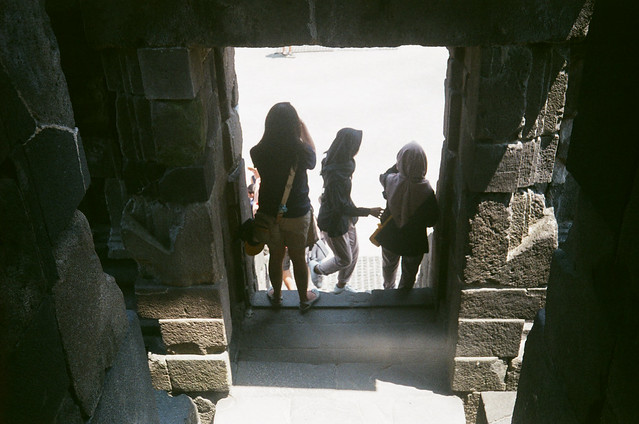 Hiding under the shade, escaping from the bright sunshine. 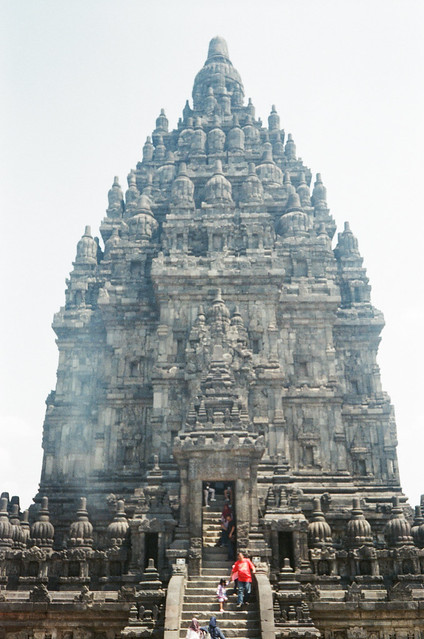 The main temple in the site is Candi Siwa. Inside the main hall of the temple is a statue of Shiva, the great god of Hinduism. Candi Siwa is located right at the heart of the site, surrounded by smaller temples. 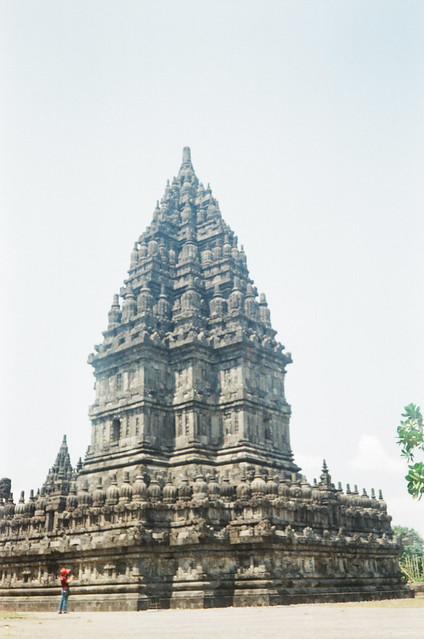 This is one of the small temple, it stood at the back corner of the site. But even so, compared to the adult standing next to it we can see how big it really is. 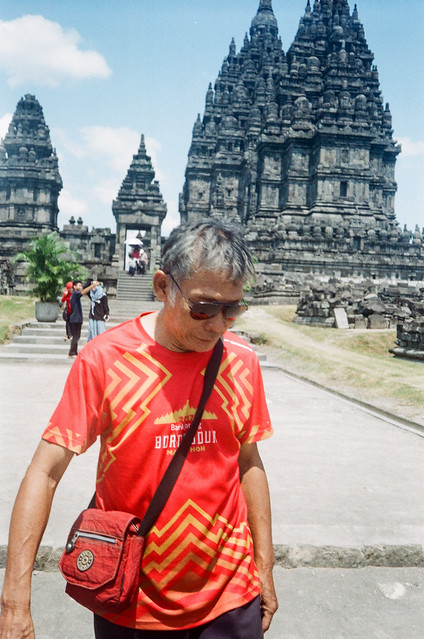 A candid shoot of my dad, which turned out pretty nice. I love how all the colours turned out in this particular shoot. I think I’ll be stocking more Fujicolor C200 and practice with them. 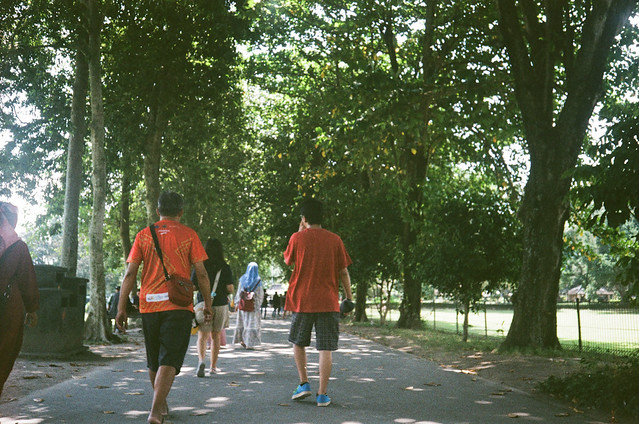 Around the temple site they build parks that families and tourists could enjoy. They rent out golf cars and scooters also. 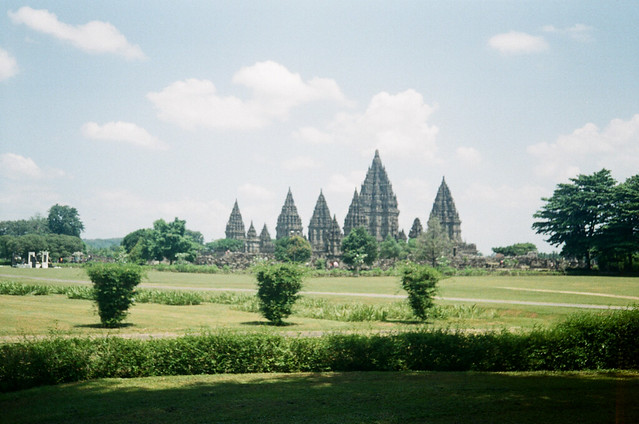 The temple site from afar on our way back to the parking lot. 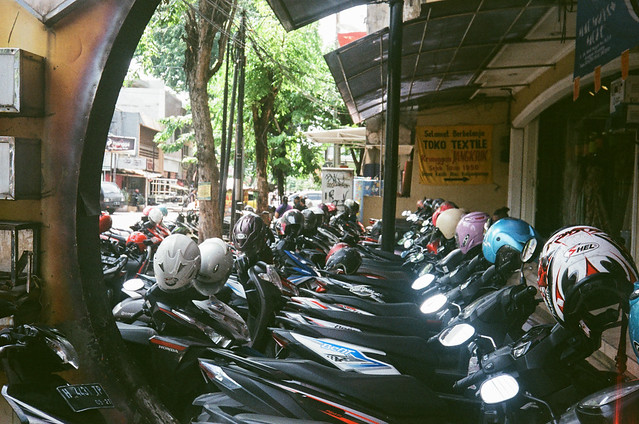 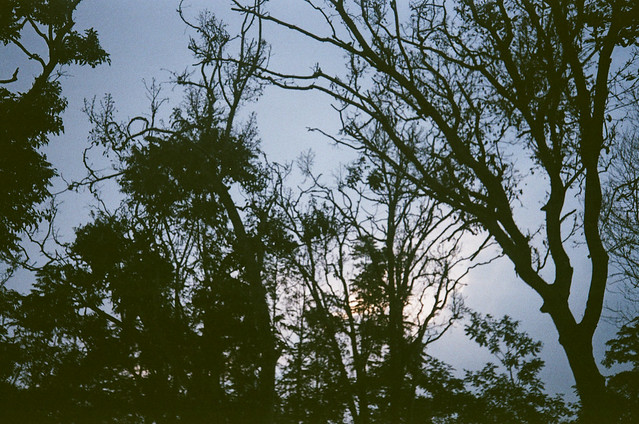 My Fuji DL-10 is even older than my age, although the rewind crank was broken and the flash died completely, but shooting by literally just snap and shoot really is fun. Since I’ve started using DSLR for professional works, the past couple years I’ve been losing my love for photography due to overthinking about all the mechanical and theories of shooting.

On another note, I will be leaving for Africa for a year to volunteer with my church’s denomination community. I’ve decided that I won’t be bringing my DSLR camera and instead I will bring my versatile Casio ZR1200. And since this roll of film has proved that the camera works just fine, I’ve been thinking to also bring the Fuji DL-10 with me with some stock of film rolls along.

While I won’t be shooting much the next two months (except maybe for the Indonesia Open 2019 in July) since I think I mostly would be busy with the preparation since I’ll be leaving on August, but hopefully I will be able to shoot more after I arrive.

My friend Bayu gave me two rolls of Agfa APX 100 two years ago. One roll, unfortunately, was burnt out by accident. The other one, I took it along with me to Abu Dhabi for a work trip last month.

Yesterday I got the result from the lab, and I could say, looking at it rekindled my love for the film photography in a way. I even bought another roll (Fuji C200) to play around.

That, and to test my Fuji DL-10 again. It back cover leaked some lights in Abu Dhabi, and the guy from the lab just fixed it for me today. I want to see if it would work or not, so I bought a roll from them.

Nonetheless, here are my favourite result from my first roll in ten years or so. 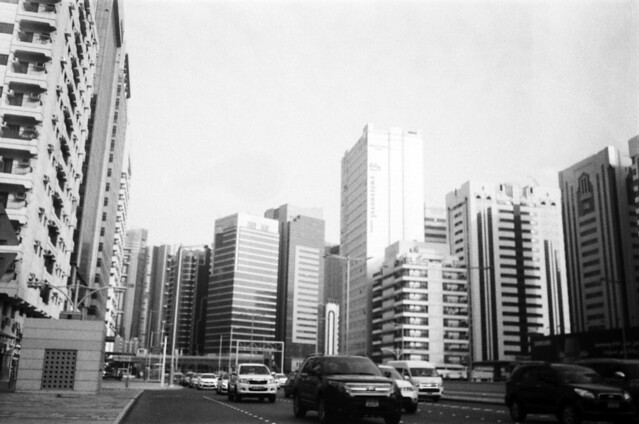 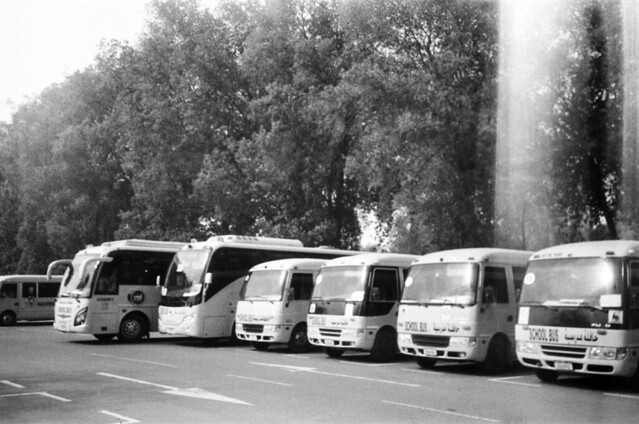 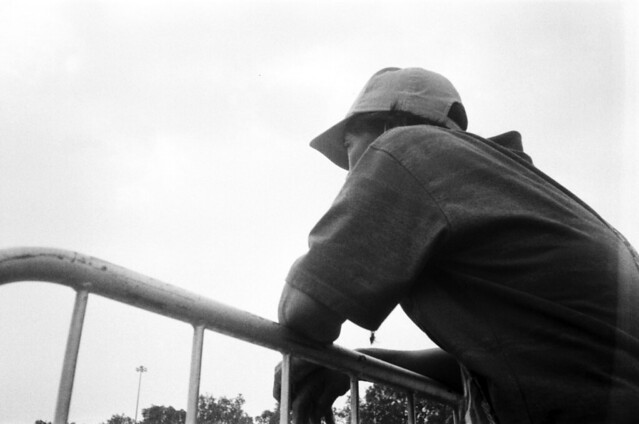 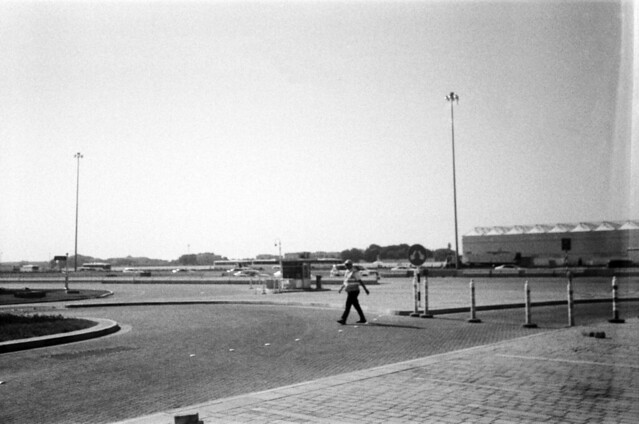 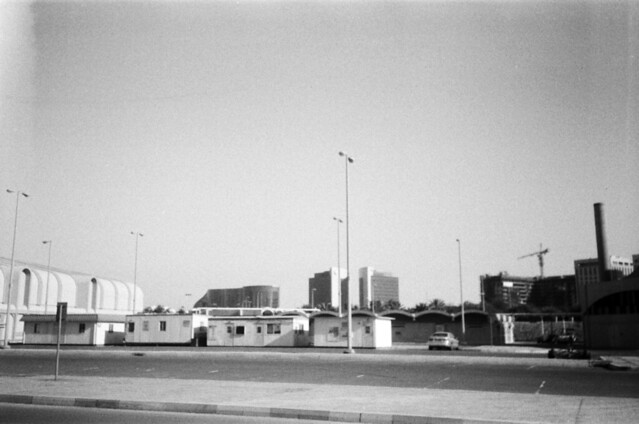 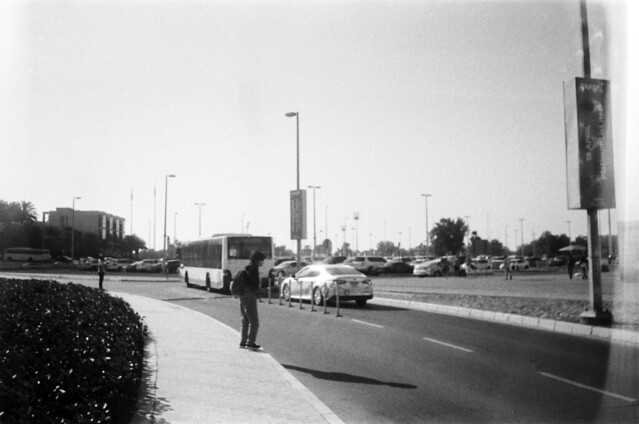 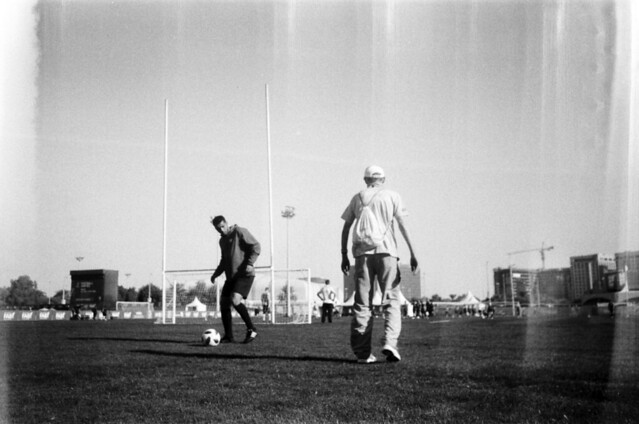 Since moving to a new city and leaving my DSLR camera back home I’ve been looking for a better-than-my-crappy-cellphone pocket camera to help me take my daily snaps.

I was lucky to get this camera second-hand in good price and good condition to boot. And not to mention, although old, this camera has manual mode, aperture and shutter priority mode!

Here are some of my favourite snaps on my flickr page with this tiny but mighty one.

While of course, with years used to the quality of a DSLR, I was having a hard time to the limited options I have with a pocket camera, like I could not really control my focus, but I think of this as a chance to re-learn composing, just like how I did with my analog point-and-shoot camera 10 years ago.

I had the chance to attend a workshop last time, and although it was more like a sharing session than a proper class, it really was eye-opening.

The speaker is a portrait and products photographer, he took a lot of portrait photos with his film camera too. He is also using that Fuji 400H like Ishikawa Yuki-san.

He taught us to take photos in black and white. This is a new experience for me, as I very rarely took monochrome stills! I love colours and although I muted my pictures, I love those splash of colours.

Those pictures are the shots he took and printed in 1×1 fancy card papers and glossy photo paper. He even let me took some (I have that hydrangea shot on far right bottom, it was my favourite since the first glance)

As usual, I took many random shots, some are in colours and some other are in monochrome.

I was using my lens kit on manual focus to train my eyes to get them right. This is necessary as my nikon analog lens doesn’t have that auto mode thing. No.

Well, it is either I’m still bad at it, or my eyes just went worse and I need a new pair of glasses.

I have the speaker give me some pointers, he checked through the shots I took during the session and told me which he thought look great.

And I have to admit, I do feel proud that he told me my photos are unique.

there are reasons of why we want to preserve ‘now’ forever

it is because these people,
this place, these things
feel just right and just so
perfect

恭贺新禧！！新年快乐！！ 身体健康 大吉大利 年年有馀 万事如意！！ Happy Chinese New Year from this lil pup, a real doggie, and a dog-year kid!! I spent last days of the year out there somewhere in the middle of no where, and it was just so beautiful! What a treat to end the year ❤️ p.s I don't mind receiving my 🧧🧧 6 months late in July ✨
find happiness in little things 🌼 #canon700d #nikkor35_70mm #vsco
Back to top
MoonやSun
Powered by WordPress.com.